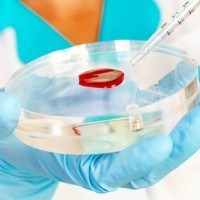 Health Conditions, News 0
Dr. Howard J. Federoff, the Executive Vice President of health sciences at Georgetown University Medical Center says “This is a potential game changer.” Referring to the new discovery of a simple blood test that can predict if a healthy person will develop Alzheimer’s or a Mild Cognitive Impairment (MCI) within the following 3 years; with 90% accuracy.

Researchers at Georgetown along with six other health institutions discovered and validated this test. Releasing their findings in the April issue of Nature Medicine.

This discovery will help the development of early treatment options for Alzheimer’s disease as well as offer a reliable test to discern your risk before the disease takes hold. Researchers and other medical professionals admit it will be years before this test will be available at your local doctors office, due to the red tape and further testing that needs to be done. These preliminary findings are extremely promising though, a huge leap in our understanding of this incurable disease.

Researchers at Georgetown University Medical Center wanted to find a blood test that could effectively detect Alzheimer’s disease, at the beginning they didn’t know what they were looking for though. It turns out that testing for fats was the easiest and cheapest option, so it was a natural starting point.

Hundreds of healthy individuals over the age of 70 had a series of blood tests. Five years after the initial tests, 28 of these individuals developed Alzheimer’s disease or a MCI.

The researchers looked at over 100 different lipids, looking for something that set these 28 seniors apart from the rest. They found that low levels of a particular 10 lipids was the commonality between these 28 seniors.

To help verify the findings, researchers looked at blood samples of over 50 other patients with Alzheimer’s or a Mild Cognitive Impairment. These individuals also had low levels of the same particular fats.

What A Lipid Blood Test Means for Alzheimer’s Treatment

Lead author of the study Mark Mapstone, a neuropsychologist at the University of Rochester Medical Center says the beauty of the test is it can detect Alzheimer’s long before a patient has any symptoms. This suggests the disease begins long before any memory impairment is experienced.

Helping people diagnose Alzheimer’s disease before symptoms begin showing up allows them to better prepare for the disease and get affairs in order. Others say knowing is worse, as the disease in incurable.

While Alzheimer’s disease is incurable, it is slowed by certain nutritional supplements. Improving cognitive health and function early in life will help fortify your brain from developing a cognitive impairment like Alzheimer’s.

How To Maintain and Improve Cognitive Health