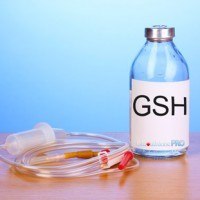 While this is no longer the case, with advances in oral glutathione supplements over the past decade, IV glutathione is still a great option for those who can afford the time and price associated with the therapy.

Antioxidants are critical for the healthy function and development of our body and cells. Among the most important and beneficial of these antioxidants, glutathione.

Glutathione is known as the body’s Master Antioxidant because it aids in the detoxification process of every single cell. GSH levels are often examined in order to determine a patients overall body toxicity level, the single best indicator of a person’s overall health and well-being.

The detoxification process helps cleans the body of toxins, chemicals, heavy metals and free radicals, all of which can cause severe damage to our cells and organs. Clearing them from the body is extremely important in order to maintain optimal health and cellular function.

As mentioned at the beginning of the article, there is no more direct or effective way to enhance glutathione levels as going for regular glutathione injections. While this is just not an option for most of us, many people are able to make multiple trips to the doctor each week, and the cost is not a factor when it comes to their health.

Numerous studies have been done on the efficacy of IV glutathione therapy in patients with Parkinson’s Disease. These studies have suggested that patients who undergo regular GSH injections have been able to slow down the progression of their disease and alleviate some of the symptoms associated with PD. [1]

Virtually all health afflictions are worsened by the accumulation of toxins and heavy metals, neurological diseases are especially susceptible to damage from these toxins. By removing these toxins from the body and improving the function of the liver, glutathione can help improve overall body health and immune function in order to help prevent, slow down and repair damage to our body.

Chemotherapy is a go-to treatment for cancer patients. Essentially weakening the body and destroying the cancer cells, among others. This is an extremely damaging treatment that causes severe harm to our body, a cost that many find appropriate in order to rid their body’s of cancer. Patients undergoing chemotherapy can help inoculate themselves against excessive cellular damage by fortifying their immune function and cell health with certain antioxidant. Protecting the healthy cells from damage while encouraging the death of harmful cells.

One study examines the effects of glutathione injections for patients undergoing chemotherapy treatments. It found that the glutathione did not interfere with the chemotherapy drugs and it even helped in the prevention of CDDP induced neurotoxicity. [2]

IV Glutathione – Not the Only Option

Many people, articles and even doctors believe that you cannot orally supplement glutathione effectively. This is simply not true.

Supplementing with the precursors to endogenously synthesize glutathione is also a proven effective way to enhance GSH levels. [4] N Acetylcysteine is one of the best options for aiding in the natural production of glutathione. Acting as a powerful antioxidant with its own unique properties, it also provides the rate limiting building block of GSH, cysteine.

Supplements that can help with the production and recycling of glutathione include: N acetylcysteine, alpha lipoic acid, selenium, vitamins B,C,E and milk thistle (silymarin).