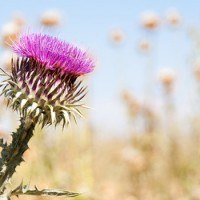 Health, Supplements 0
Milk thistle is a plant native to the Mediterranean region of Europe, the Middle East and North Africa. The name comes from the appearance of the leaves, which are splashed with lines and bands. Milk thistle benefits are abundant in number and variety, having been used for centuries to remedy a plethora of ailments.

This was done in a double blind study involving workers exposed to toluene and/or xylene for 5-20 years. Over the course of 30 days, those given the milk thistle supplement showed a great improvement in liver function, as opposed to those given the placebo.

The chemical thought to be responsible is called Silymarin. Silymarin is also found in other plants that are known as “hangover cures” because they help rid the body of toxins accumulated from drinking. However, results in tests are mixed when it comes to alcohol. This is mostly due to problems with the studies. Not enough patients were tested and differences in dosages made the results unreliable. Although, it did prove to be promising to those who did take the milk thistle supplement, suggesting that it may be a good cure and preventative measure for liver damage caused by alcohol or even drugs such as acetaminophen.

Milk thistle has been used for thousands of years in the Mediterranean area, and for hundreds of years all over the world. The Silymarin effect on the liver had shown regenerative effects, protection from free radicals, and a detoxifying effect. The Silymarin found in milk thistle seems to have similar effects on other organs of the body, making it a good supplement to add. Milk thistle is a tried and true method, and it looks like it’s here to stay as scientists continue to test and find extremely positive results not only in the liver and kidneys, but all organs.

Top 10 Reasons to Use A Quality Glutathione Supplement

Everything You Need To Know About Glutathione