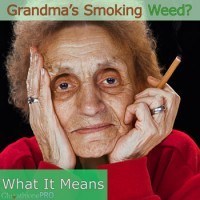 Lifestyle, News 0
As many of you already know, the “Grandmas Smoking Weed for the First Time” video has taken the internet by storm. There is more to take away from this extremely entertaining video than meets the eye though.

One thing you may notice is they emphasize the fact that they are smoking legal marijuana. The ladies are also quick to point out the benefits of smoking & vaporizing marijuana. Explaining they feel less tension in their shoulders and an “I dont care” feeling, which can be construed as positive or negative depending on the context. The message that I got out of the video was that these three ladies experienced reduced stress levels and seemed to enjoy themselves quite a bit.

Is this video a public service announcement touting the benefits of marijuana, or was it released for pure entertainment purposes. Personally I find it hard to believe there was not an ulterior motive for creating this viral sensation. With the legalization of medical and recreational marijuana use in certain states, the pressure is building to implement this nationwide.

Smoking anything is inherently unhealthy, increasing the carcinogen levels which can lead to a myriad of problems. However there is much to be said for the health benefits of smoking marijuana, whether it is to help reduce chronic pain, increase appetite or relieve stress.

Showing elderly women smoke weed for the first time helps relieve the stigma associated with this once demonized drug. The publics perception of pot smokers has changed radically since the days of “Reefer Madness”. The video just goes to show that even the most unsuspecting individuals can not only benefit, but enjoy smoking marijuana.

We do not mean to endorse the use of marijuana for everyone, as it is still a mind altering drug that can do harm. However we wanted to point out that smoking marijuana does yield medical benefits for some, and the public’s view on weed is changing rapidly. The grandma’s smoking weed for the first time video just goes to show how accepting we are becoming to medical and recreational marijuana use. For better or worse.

Why You Need To Promote This Vital Antioxidant

9 Health Myths That Will Blow Your Mind!

Some of the Best Fitness Supplements

The Potentially Fatal Side Effects of Statins

What are the Benefits of Bacteria?
Glutathione and Nootropics for Memory