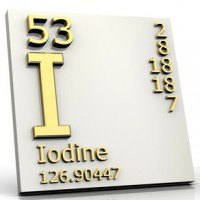 Iodine benefits are plentiful, however its the frightening level of Iodine deficiency that we want to address. According to the world health organization, as much as one third of the world’s population lives in geographical areas where iodine content of the soil is inadequate. In the in the America alone, the incidences of iodine deficiency are very high and widespread, due to improper diet.

Iodine is a trace element or mineral that occurs naturally in the soil, absorbed by plants and also found in animals who eat these iodine rich foods. Iodine is termed trace element because it occurs in very small quantities in the natural soil. In addition, the human body is not capable of synthesizing it therefore it must be obtained from dietary intake.

In the body, iodine is mainly stored in the thyroid gland found in the neck. Here this trace element helps in the production of thyroid hormones; thyroxin and thyronine, also referred to respectively as T4 and T3. These two hormones are vital in the regulation of growth and development by influencing many biological pathways and processes.

What Are The Benefits Of Iodine?

Almost all aspects of health are affected by iodine because the thyroid gland produces hormones that have actions in many organs as well as influencing the actions of other hormones. Here are the some of the most important benefits of iodine:

The two thyroid hormones synthesized from iodine play a very important role in increasing the basal metabolic rate of the body. This is important in burning excessive fat, promoting weight loss an increased energy levels.

With higher metabolic rate there is also improved production of energy by the metabolizing cells. Proper cell energy production translates into increased mental and physical alertness, increase in stamina, as well as a healthier more reparative sleep.

Detoxification of the body:

Iodine is known to encourage the body to get rid of waste products especially through sweating, also by improving liver function. It is especially effective in the elimination of toxins such as mercury, fluoride and lead which are the most common environmental toxins.

Iodine and the two thyroid hormones are essential for maturation and proper functioning of the reproductive system. It increases libido and sexual performance. For pregnant women, iodine is essential in the normal development of the fetus therefore preventing birth defects.

Iodine has been shown to be effective in the treatment of fibrocystic disease of the breast. It also reduces the chances of developing various types of cancer including that of the thyroid gland.

Why Should Iodine Be Supplemented?

As already been mentioned, iodine is available only in limited quantities in the environment. Furthermore, it cannot be synthesized by the body and therefore must be supplied through diet. People in geographical areas whose soil is deficient in iodine and those who cannot access adequate amounts of iodine containing foods may require supplementation.

With inadequate intake of iodine the thyroid gland is forced to work harder to provide adequate levels of thyroxin and thyronine. This leads to enlargement of this organ; a condition known as goiter. This is not just aesthetically unsightly but also has serious health consequences.

People with iodine deficiency also feel tired, have muscle pains and aches, are not enthusiastic and are often depressed. If you have any of these symptoms then it is possible that you are iodine deficient and therefore you need supplementation. Too much iodine may not be good for your health and therefore it is important to know your iodine levels as well as the amount you need to supplement. We always suggest talking to your doctor about your supplement regimen.