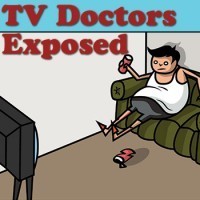 News 1
What if I told you that most people got medical advice from daytime television and not their own medical doctor? Well, in this day and age it is the truth. Between television and Google, the majority of health coaching happens in the comfort of your own home. This is both a blessing and a curse.

Experts Review Medical Advice Given by Dr Oz and The Doctors

Canadian researchers recently took it upon themselves to debunk some of the outlandish medical claims made on the most popular health shows. What they found was horrific, more often than not, the advice given by health guru Dr Oz is not supported by factual evidence. The Doctors had a slightly better report card, with just over half of what they claim being based in reality. [1]

These numbers are based on experts reviewing 40 episodes of each show from early 2013. The experts reviewed and evaluated 80 randomly selected medical recommendations from each show.

After the results of the study were released, representatives from both shows were quick to respond.

Dr Oz and The Doctors Respond to the Study

Representatives from the Dr. Oz Show: “The Dr. Oz Show has always endeavored to challenge the so-called conventional wisdom, reveal multiple points of view and question the status quo. The observation that some of the topics discussed on the show may differ from popular opinion or various academic analyses affirms that we are furthering a constructive dialogue about health and wellness.”

Representatives from The Doctors: “The Doctors was never contacted about the study or the article. Our producers and doctors all do their due diligence to make sure information provided on the show is sound, relevant and timely – often debunking the myriad of medical myths that abound in the media and across the internet.”

These shows rely on ratings and viewers, and quite frankly they do a fantastic job peaking viewers interest. Dr Oz was first made popular by the Oprah Winfrey show, since then he has become one of the biggest names in daytime television. People are more likely to get their medical advice from the Dr. Oz Show than from their own doctor.

It is difficult for these shows to retain viewer interest without using buzz words and offering “magic” solutions to common problems, such as weight loss. The Dr Oz Show was in trouble for this recently, Dr. Mehmet Oz had to answer for his shows misleading advice in a senate hearing. [2]

When 14%-15% of the advice given on your show is contradicted by medical science, there is a problem.

Co-author of the study, Christina Korowynk, associate professor of family medicine at the University of Alberta says “The bottom line message is for people to be really skeptical about the recommendations made on these medical television shows,” and we couldn’t agree more. Any medical advice presented as fact should be backed by easily accessible scientific evidence.

Take these shows for what they are; entertainment. Always consult with a medical professional before making dramatic changes to your diet or supplement routine. Don’t take anyone’s word for gospel, check the facts and demand evidence.

Personally, I watch Dr Oz regularly. This doesn’t mean I agree with everything said on the show, but there are beneficial takeaways in every show. Whether it’s insight into what is trending in the health community or being introduced to a new supplement. It is a launchpad, prompting me to research into these things further and form an opinion based on evidence.

I believe Dr Oz has profound knowledge, however he is in the entertainment business, so never take anything without a grain of salt.